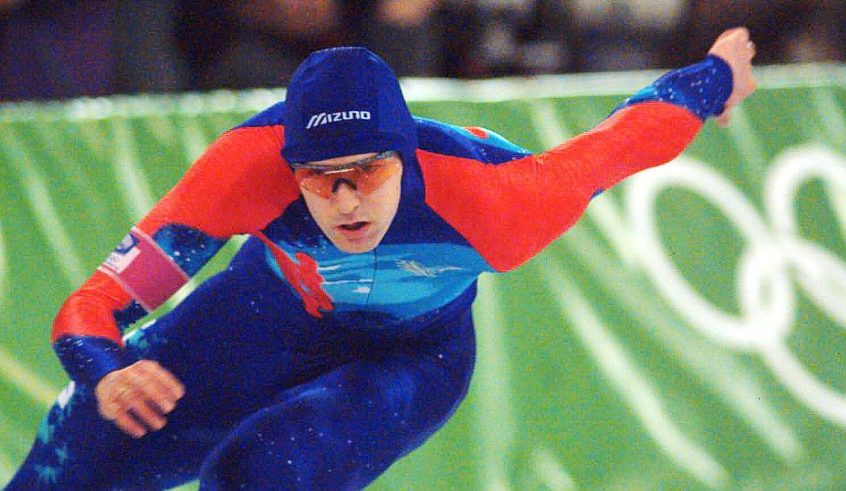 BRISTOL — Dan Jansen has gone from the podium to the platform.

The Olympic gold medalist is using his athletic success these days to help causes near and dear to his heart.

That included the former champion speed skater making a stop here Monday to be the featured participant and speaker for the Memories Matter Charity Golf Classic.

Jansen, who won a gold medal in the final race of his career at the 1994 Winter Olympics, was at Elcona Country Club to do his part to raise both money and awareness for the Living Wisdom Center for Dementia Care at Hubbard Hill in Elkhart.

“I love the fact they are trying here to find different ways to treat people,” said Jansen in reference to the new facility at Hubbard Hill, which just started accepting residents this month. “I think they are on to something here and will make a difference for both the patients and their families.”

Jansen knows all too well about the terrible disease. He lost his father Harry, a former police detective, to Alzheimer’s back in 2015.

Jansen devotes time to charity work and speaking engagements these days. His foundation, which was started in memory of his sister Jane, helps those with leukemia and their families. Jane died of leukemia in 1988 at the age of 27.

“We have to give back and try and help others,” Jansen emphasized of his charity work. “We have to try to make the world a better place or we are just existing.

“My sister was always the one who encouraged me. She was the person for me when the times were rough that I could go to. Helping families affected by leukemia is all part of her legacy to me.

“I see the same principles here at Hubbard Hill with what that are doing.”

Jansen’s story is one of perseverance. He finished fourth in the 500 meters at the 1984 Olympics. He then did not medal at the 1988 Olympics after falling in both of his races after being told his sister had died. He did not medal again in 1992 before setting a world record in the 1,000 meters in a time of 1:12.43 to claim gold in his last race at Lillehammer in 1994. That race came after he placed eighth in the 500-meter event.

“Skating was a huge part of my life and I’m proud of what I’ve done on the ice, but I would have been OK if I didn’t win that last race,” said Jansen, who set eight world records in his career. “When I share my story on the ice my message is about perseverance and perspective, although tonight I will talk more about my dad.”

Jansen, who now lives in North Carolina, grew up in West Allis, Wisconsin as the youngest of nine children of Harry and Geraldine Jansen. He began skating at age 4 and played many sports, with baseball being his favorite. He won a national title on skates at age 13 or 14 and remembers when he knew speed skating was his calling.

“I was 14 and saw Eric Heiden win five gold medals at the Olympics in Lake Placid,” recalled the affable Jansen, who stands 6-2. “I knew then that I wanted to go to the Olympics.”

Barb Kauffman, who is a management consultant for Hubbard Hill, said it’s vital to have someone like Jansen helping out.

“It’s incredibly important to have events like this,” said Kauffman, who lost her mother to dementia in 2016. “Especially to have someone like Dan here who is relevant to the cause. This is very meaningful to him.”

“The Living Wisdom Center is life changing,” she continued. “It helps heal what science can’t cure. If we raise awareness and give these people a better way of caring for them then we have won.”

Jansen has done speed skating commentating for NBC and also served as a skating coach for the Chicago Blackhawks since his final race. He now focuses on charitable endeavors and also physical and mental training for NASCAR drivers back home in North Carolina.

Jansen, who will turn 54 next week, carried the U.S. flag at the closing ceremonies in 1994.

“I’ve never felt more patriotic than on the podium,” recounted Jansen, who was inducted into the U.S. Olympic Hall of Fame in 2004. “It was a different feeling when they played the national anthem. It all came back then. All the help I had gotten from my family and friends to get there.”

Jansen says it never gets old talking about his last race.

“It’s hard to forget and why would I want to,” Jansen said. “What it meant to my family to win that race was what I was most proud of.”